Aim of the action Transnational Family Dynamics in Europe (TraFaDy) is to deepen the knowledge of the growing, rapidly changing phenomenon and dynamics of transnational families (TNF) by bringing together researchers and stakeholders from different disciplines and countries to address the need for transnational insights and to formulate policy and practice-oriented recommendations with an impact on international, national, sub-local and local practices.

CHM is Austrian partner with a focus on health and well-being of transnational families.

Aim of the action  Intergenerational Family Solidarity across Europe was to synchronize, integrate and improve European research in the field of intergenerational family solidarity, its benefits in key life domains and the ways in which it can be strengthened across generations.

CHM was Austrian partner with a focus on intergenerational family solidarity in migrant families.

Symposium on Intergenerational Solidarity and Migration

The Symposium Intergenerational Solidarity and Migration in the framework of the COST-INTERFASOL international conference in Milan on 26 May 2016 presented and discussed insights into existing knowledge, current research activities, and practice implications in/for European countries and regions.

In the framework in the training school „Intergenerational Solidarity in a Diverse World“ at the Faculty of Psychology and Educational Sciences, University of Porto, Spain from 04 –08 April 2016, CHM held a training session on „Intergenerational solidarity and migration – an emerging field for transdisciplinary and practice-focused research“.

Intergenerational Family Solidarity (IGFS) is important for social cohesion and challenged by migration. Scientific evidence on how migrants sustain IGFS is scarce. In 2016, 421,875 migrants from different Former Yugoslavian Republics were residing in Austria, the majority coming from Bosnia and Herzegovina (162.021) and Serbia (137.057). Immigrants from these countries are predominantly economic migrants who came in the 1960s and refugees of the Balkan Wars in the 1990s. A literature review showed that intergenerational solidarity in migrant families in Austria is hardly covered by previous research. No published studies explicitly dealing with this subject were found. To generate more understanding, three migrant women who migrated as refugees in the 1990s from Bosnia and Serbia where asked about their family structures, family life, and family solidarity through semi-structured in-depth interviews based on qualitative sociological method. Results show that although immigration has weakened IGFS in terms of frequency of contact, high normative solidarity prevails and results in feelings of guilt and non-met family responsibilities. Support of parents and relatives is sustained by sending money and goods to the home country. 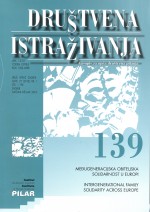